Start a Wiki
The James Walsh is a character in Say Goodbye to America: Scatter
James Walsh 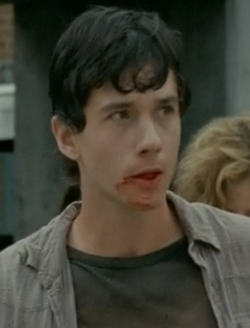 Nothing is known about soldier's life before the outbreak

The unnamed soldier is first seen with Max and Jane Byron after an undead Anthony attacks the Yard. He brings Max inside the building and asks what to do

It is revealed by Jane's inspection that James is bitten on the shoulder and will eventually die. Not wanting to die yet, he pleads Max to stay with him until he dies. James talks about his mother and about the peaceful feeling he has while he's dying. He eventually died and is put down my Max

Retrieved from "https://undeadfanstories.fandom.com/wiki/James_Walsh_(Scatter)?oldid=207366"
Community content is available under CC-BY-SA unless otherwise noted.