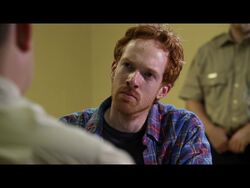 Nothing is known about Jackson's life before the outbreak

At some point, the survivor joined the Apex commnuity

The survivor is first seen fighting against the armada from the Yard. He is shot in the shoulder by Izabel and carried off the Elizabeth's office by David Blair. He is later seen being treated by Jack West

Jackson is among those who volunteer to search beyond the borders the community has searched to find supplies to rebuild. He leaves with Doug Santos, Olivia Graham, David Blair and Sebastián Bernal

Jackson steps out with Doug, Olivia, Sebastián and David to shoot at the walkers coming from the woods. he kills the walker that bites Doug and watches as the latter runs off to allow the others time to escape. He is later seen in the Train Station and finds Ciara Nash with the others. He asks her where she's from and sees her companions, Chester, Barney Munson and Arturo Vazquez when they step out

Jackson, along with the others, is introduced to Chester Navarro, Arturo Vazquez and Barney Munson before the group decide to drive towards Waterfront. They stop at one of the outposts before eventually arriving at the gates of Waterfront. He joins Phillip, Sebastián, Olivia, Miranda and Nathan to meet the leader of the community

Jackson is introduced to Shoshana Adams with the others from Apex. He brings up the topic of trade between Waterfront and Apex. He is seen on the tour with Chester and asks about the kitchens

Jackson appears with the rest of the group in Shoshana's room after she has been killed. He witnesses Reina kill Cal and reminds her to make sure she destroys his brain so he doesn't turn. He is later seen saving Leo's life by shooting Chuck from the guard tower.

Retrieved from "https://undeadfanstories.fandom.com/wiki/Jackson_Allen_(Scatter)?oldid=208777"
Community content is available under CC-BY-SA unless otherwise noted.