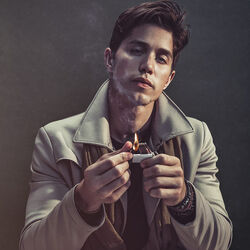 Nothing is known about J.D's life prior to the outbreak, except that he was a college student

At some point, J.D. made a home in his university's med school

J.D. first appears with Andrew Marino and Roger Fester during a standoff with Fish West and Sylvester Nelson when the pair stumble upon them looking for supplies. He is also present during the larger standoff when the soldiers arrive

J.D. will appear in this episode

Retrieved from "https://undeadfanstories.fandom.com/wiki/J.D._Eisbach_(Scatter)?oldid=211095"
Community content is available under CC-BY-SA unless otherwise noted.