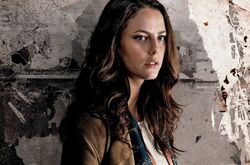 Nothing is known about Ilene's life before the outbreak

At some point, Ilene made her way to the O'Connor Compound, where she ended up a prisoner

Ilene appears eating a protein bar before Asher Praedo starts the fire which allows the prisoners to escape. She rides with Peanut, Hazel, Jason Herr and Megan, the latter of which get shot, and they escape from the Compound. While fighting off the dead, she later helps Hazel by killing one attacking her

Retrieved from "https://undeadfanstories.fandom.com/wiki/Ilene_Wright_(Scatter)?oldid=209779"
Community content is available under CC-BY-SA unless otherwise noted.