Start a Wiki
Hogan is a character in Say Goodbye to America: Scatter
Hogan 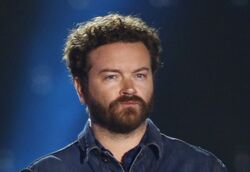 Nothing is known about Hogan's life before the outbreak

At some point, Hogan joined the O'Connor Compound

Hogan first appears in truck on the road with George and Julia Sabre. Although unseen, he is the one who fired the shot and killed Barney Munson, as he was the only one with a sniper rifle. He appears with the others, including Dave O'Connor and Noah, firing on Jenny Hanson, Nate Demarco and Arturo Vazquez. As the Compound group escapes, George is shot by Nate, and Hogan and another survivor help George back. While the other survivor is killed, Hogan is able to drag George back to the truck before the group drives off

Hogan appears with Copper, Julia, Creighton Duke and Tara discussing the best part of the chicken in the mess hall. he is present when Clove runs in and tells Ned O'Connor to come to his office, but continues to enjoy his pot pie

Hogan is set to drive Ned and a beaten Asher Praedo to Apex during the assault. When he opens the door, he sets off a car bomb meant for Ned, which kills him instantly

Retrieved from "https://undeadfanstories.fandom.com/wiki/Hogan_(Scatter)?oldid=211199"
Community content is available under CC-BY-SA unless otherwise noted.