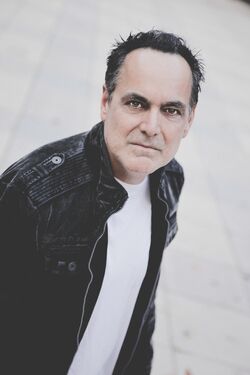 Nothing is known about Harris's life before the outbreak, except that he was a doctor

At some point, Harris became a member of Ned O'Connor's inner circle

Harris is first seen watching Octavio Arévalo and Eli Wilson through binoculars up on a hill with Ned and Dave O'Connor. He asks if they should go in full force or one car

Harris is with the O'Connor brothers when they meet with the other soldeirs: Noah, Copper, George, Clove, Noam and Samantha. All of them later stop Octavio and Eli at gunpoint, where things elevate and Harris kills Octavio

Harris, along with Clove, Samantha and Noam, attack Evan Curtis, Jasper Bernard, Rick Conrad and Harper, killing the latter two. When Harris is close enough to Evan, he is shot by a dying Rick, and eventually is put down by Evan

Harris is seen in a flashback with Ned, Noah, Samantha, George, Copper, Julia Sabre and Dave O'Connor. He appears when the survivors from the Soapstone Trail Military Base cross into their territory.

Retrieved from "https://undeadfanstories.fandom.com/wiki/Harris_Moore_(Scatter)?oldid=211227"
Community content is available under CC-BY-SA unless otherwise noted.