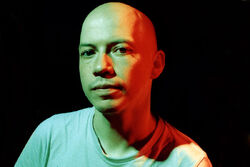 Harold first appears in the briefing room asking Major Stuart Montgomery for more supplies. Before he can approach, he is told by Captain Lucas McDermott he was not allowed but Stuart allows him to walk up anyway. He also asks for help in the lab, so Patrizia Torres, Hazel Burns and Corporal Maxwell are assigned to assist him in the studies. Later, Harold is in his office when McDermott, having recently taken control, walks in to shut Harold down. McDermott notices the reanimated corpse of Ellis as a test subject, and it is revealed Harold let him get infected for science. McDermott chokes Harold, revealing how the Major really died, before crushing Harold's throat and tossing him to the side. McDermott then shoots him in the head

Retrieved from "https://undeadfanstories.fandom.com/wiki/Harold_Martin_(Scatter)?oldid=209851"
Community content is available under CC-BY-SA unless otherwise noted.