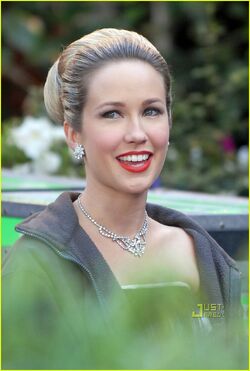 Hannah Johnson is a character in Say Goodbye to America: Scatter

Nothing is known about Hannah's life before the outbreak

At some point, Hannah joined the Apex community

Hannah, along with Aaron, Garrett, Matt and Frank are in the mall surrounded by walkers when Todd Andrews and Phillip James show up.  She is present when Aaron puts Frank out of misery and flees the mall with the other survivors

Hannah appears when she and the others are running from the mall to Fish's truck.  It is unknown where she goes when the group returns to Apex

Hannah is seen attending Jenny's party, where she, along with the West brothers, Eric Dugan, Garrett and Todd talk about the new living arrangements

Hannah appears with Miranda, Annie and Lindsay Meyerson when the group from the mall return

Hannah is seen during the attack on Apex, during which she is killed by Arrowhead

Retrieved from "https://undeadfanstories.fandom.com/wiki/Hannah_Johnson_(SGTA)?oldid=207399"
Community content is available under CC-BY-SA unless otherwise noted.