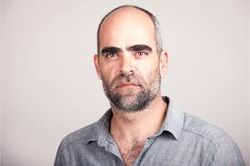 Nothing is known about Gutierrez's life before the outbreak except that he was a Sergeant in the U.S. Army

Once the outbreak started, Gutierrez was stationed at the Soapstone Trail Military Base

Gutierrez is first seen in the briefing room being told to take over the meeting by Major Stuart Montgomery. He talks to Ilene Wright about supplies and talks down to PFC Gunderson about her alcohol abuse, showing his distaste for her, and breaks up an argument between her and PFC Marty. He arranges for Corporal Maxwell, Hazel Burns and Patrizia Torres to assist Dr. Harold Martin in the lab. After the death of Montgomery, Captain Lucas McDermott takes over and assigns Gutierrez and Quinn Kane to be hunters and is later told to clear the gates with Gunderson and Maxwell. When the dead enter the base, Gutierrez wakes up McDermott and watches as he takes a rocket launcher from his room. He is later seen with McDermott, Maxwell and David Sharpe clearing out the corridors when they see the reanimated corpse of Gary Sanchez. The four of them start to run through the base in an attempt to clear it

Retrieved from "https://undeadfanstories.fandom.com/wiki/Gutierrez_(Scatter)?oldid=209857"
Community content is available under CC-BY-SA unless otherwise noted.