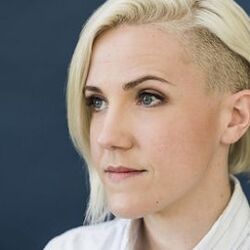 Nothing is known about Gunderosn's life before the outbreak, except that she was a Private First Class in the U.S. Army

At the start of the outbreak, Gunderson was stationed at the Soapstone Trail Military Base

Gunderson is first seen in the briefing room arguing with Sergeant Gutierrez and PFC Marty after Major Stuart Montgomery leaves on a supply run. She is later seen with Captain Lucas McDermott, having recently taken over, and Private Joseph Jones discussing Gary Sanchez and Ellis's injuries on their way to meet with Dr. Harold Martin. She and Jones leave at McDermott's request but return again after hearing gunshots and seeing Martin dead. She is assigned with Gutierrez and Corporal Maxwell to clear the dead from the fences at first light. In the middle of the night, Gunderson finds Quinn Kane, Martita and Megan Shorris looting the food storage. After a short standoff, Gunderson pulls out her gun and fires quickly, hitting and killing Martita, but is blocked by Quinn from her second shot. After Quinn takes hold of the gun, they have another short standoff with Gunderson on the ground. When she moves for the gun, Quinn shoots her five times, killing her

Retrieved from "https://undeadfanstories.fandom.com/wiki/Gunderson_(Scatter)?oldid=209858"
Community content is available under CC-BY-SA unless otherwise noted.