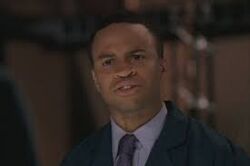 Gavin Foxx is a character in Say Goodbye to America: Scatter

Nothing is known about Gavin's life before the outbreak

At some point, Gavin joined The Yard

Gavin first appears after Brooks shoots Judy and Niklas is taken captive.  He rides back with Elena and Brooks in Judy's BMW

Gavin appears with Gregory Ames, Rick Murphy and Colin at the Target after the Manhunt for Leo.

Gavin is present during the Massacre at the Target.  While fleeing into the woods with Colin, he is shot in the back of the leg by Ruben and knocked out by Warren Smith.  He is taken in to Taylor Burns to be patched up.

Gavin is seen waking up in the Target before being taken to Apex and being introduces to Jenny Hanson. He decides not to return to the Yard

Gavin is seen with Warren, Scott Cleary and Ruben when they arrive at Jenny's. He recognizes Sean Moreland and is introduced to Eddie Hedd

Gavin is introduced to the rest of the construction crew when he arrives at work on his first day. He is set to work with Warren, Doug Santos and Paul

Gavin is seen talking with Devin Nelson at the construction site

Gavin is seen standing guard with Warren and Sean when he discusses with the former what went on at the Yard. He is present when Warren is bit and cuts off his arm to save him. He helps bring him back with Cole and brings him to Elizabeth Hill. he is later seen keeping crowd control

Gavin appears at the construction site when Ray kills two walkers out of grief. He is later present the next day during Ray's speech

Gavin is present during the latter half of the attack on Apex. He manages to kill Taz with his UMP and is present when Gregory kills Meredith and flees

"Arriving Somewhere But Not Here" Edit

Gavin works with the rest of the construction crew on the church. When Santiago Montoya falls, Gavin helps him along with Sean

"Off The Map (The Day That Never Comes)" Edit

Gavin takes part in the stage 2 of the Waterfront rebellion, during which he, along with Santiago, Taylor and Donnie, are hit with a launcher, killing Donnie and sending Gavin flying. The attacked left him blinded, and he moves towards a group of biters but is saved by Sean, Sylvester Nelson and Ruben, although the latter is killed in the process

Gavin is taken inside Waterfront and looked at by Dr. Richard Harris

Gavin lies passed out in the infirmary

Gavin finally awakes, albeit blind, and heads back to Apex

Gavin sits in the church with Sean when Garrett Smith walks in. Gavin is able to joke about his situation but questions whether or not he'll be able to see again

Gavin stays in the church when the survivors from the O'Connor Compound attack. When Dinah and Thomas Packer walk in, they grab Gavin

Gavin sits with the other survivors in a cell they were brought to after the attacks on Apex and Waterfront. At some point, he is killed and his face is carved off, later placed on one of the soldiers from the Compound and brought to Apex in a gruesome display of power. After Noah and the rest of the Compound soldiers leave, Sean places a gun on captive Mick Karn's head in anguish over Gavin's death

Retrieved from "https://undeadfanstories.fandom.com/wiki/Gavin_Foxx_(SGTA)?oldid=211224"
Community content is available under CC-BY-SA unless otherwise noted.