Start a Wiki
Franklin is a character in Say Goodbye to America: Scatter
Franklin 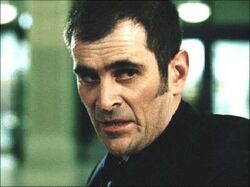 Nothing is known about Franklin's life prior to the outbreak

At some point, Franklin joined the O'Connor Compound

Franklin is first seen lying against a tree with Anna Cook after being accidentally shot by Creighton Duke during an ambush by biters. He promises Anna everything will be all right even if he dies. He calls for Ozzy and informs the group leader about a new plan, one in which the group uses the skin of the dead to lead a herd to the Wiggins Outpost. He later allows himself to bleed out against the tree. During the attack on the Outpost, Anna uses Franklin's reanimated body as a shield to attack Megan Shorris, before Anna stabs Franklin in the head, killing him

Retrieved from "https://undeadfanstories.fandom.com/wiki/Franklin_(Scatter)?oldid=211077"
Community content is available under CC-BY-SA unless otherwise noted.