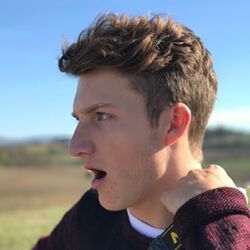 Prior to the outbreak, Francis was a high school student and younger half-brother of Andrew Marino. As revealed to Brooks, his mother had an affair with his father while married to Andrew's father, causing a rift between Francis and his brother long before Francis was born. it is also known that he was a black belt

Francis is first seen introducing himself to Brooks while he packs up his things to head towards Apex. When the group is followed by a small group of biters, Francis takes out a billy club and surprises the survivors from Apex by showing off how adept he is at killing the dead. Later, on the road, Becky's car begins having trouble, which eventually leads to Francis fighting with Andrew and the former walking away upset. He reveals the reason to Brooks and cries on his shoulder. When the biters attack, Francis fights alongside Brooks, Roger Fester and Aidan Stockdale.

Francis will appear in this episode

Francis will appear in this episode

Retrieved from "https://undeadfanstories.fandom.com/wiki/Francis_Marino_(Scatter)?oldid=211160"
Community content is available under CC-BY-SA unless otherwise noted.