Start a Wiki
The End? 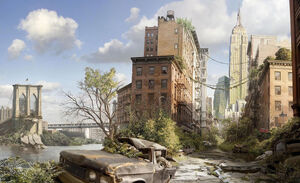 The Finished Stories page is where the completed stories are displayed. Each story is separated by Author.

Readers Read This!!
Feedback is very important to an author. Giving positive feedback motivates them to keep on writing. Therefore, it is suggested to leave a comment on the issues you read, for the author's sake.


Positive feedback is highly encouraged to maintain a friendly atmosphere. Critiques are welcome.

Rick Grimes and company attempt to survive in the apocalypse. At first sight, the walkers seem as though they are the real danger, however, it is the living that they must be wary of. This is Fight the Living

While on their way to the International Cherry Blossom Factory, two reporters and a producer are ambushed by walkers. This is the story of their survival.

MY Life For You (30 Chapters)Edit

This story follows a high school student named Aaron Lee, and 5 other survivors from the same high school, and their struggles on their experience through the zombie apocalypse.

The Walking Dead: Life of the Dead (43 Episodes)Edit

Lee Dixon's take on where Season 3 of The Walking Dead TV Series left off.

On the day of the outbreak Daniel lopez misses his flight back home to florida while in atlanta. Now he is forced to survive with people he probably never would have known before the outbreak, and become crazy and see if he can come back.

Beside The Dying Fire (16 Issues)Edit

It's Ken Myer's last day of school, and he couldn't be more excited to finally graduate High School. But his day is ruined when the news of the zombie outbreak comes around and his school is locked so no one can enter, or go out. But he and his friends have to get to their families, so what will they do?

Hope On The Rocks (160 issues)Edit

We follow Miles Vance and his group as they try to survive the horrors of a post-apocalyptic world, where dead isn't necessarily dead.
See the apocalypse from the eyes of Miles Vance (a teenage boy with uneasy sexual tensions), Chad Bottom (a grumpy black man), Odin Thormann (a cheerful janitor), Lia Camper (a teenage girl with excellent shooting skills), Al Halib (an arabic who recently lost his girlfriend) and many more interesting characters.

Daniel was the owner of a very successful insurance company, but when the dead began walking, he changed into a whole new person. Literally.

This story is set during the final episodes of The End in which the remaining survivors must find a place to settle down, and escape what has been haunting them since the outbreak.

Charlie and Sean wake up in a room, both strangers. With no idea of the other person's past, they must gain each other's trust to get out. Jim and Dave are survivors of the apocalypse, trying to stay alive. Some of these characters are connected to one another, many of these encounters told through flashbacks. They meet people along the way, setting up a chain of events that could end the apocalypse...

This story follows the journey of Will Jacobson, a man who loses everything within the first wek of the apocalypse, including his pregnant fiance and best friend. Will finds a teenage girl named Miranda during the early stages of the outbreak, and makes it his goal to get her to safety... no matter the cost.

This stories follow a group of college students from the University of Pennsylvania, who are faced with doomsday.  Cut off from the outside world, the group will have to fend for themselves against the threat known as "Zombies".  They will have to learn, kill, adapt, and most importantly, learn to trust each other if they are going to make it.

Dead Frontier follows the story of 24 year old Cole Pruitt, a call center employee and aspiring screenwriter whose mundane life turns into an everyday fight for survival when the undead apocalypse hits. His journey chronicles the good, the bad, and the ugly sides of humanity and a world overrun with the dead.

Focuses more on the people, than on the undead. Beyond The Dead follows Lionell Irvin, a young African-American male and his journey throughout the apocalyspe. He must face the pros and cons of every decision he makes, whether they were from the past or from the present. He will learn the biters are not the only ones you must worry about, but are those beyond the dead.

When a death occurs in Misty Forrest, Bradley Carr is thrown into a new world of terror. Throughout this experience, we'll introduce many new characters, and re-introduce many old characters.

A short story that follows the mutiny of residents towards their militia. When the residents of a town decide to make stand, they set off a chain reaction that leads to the entrails of betrayal where the moon shines on the desert wasteland.

When Tom Smith returns from taking his neice Hope on a camping trip, he didn't expect to find the world falling apart and everyone eating eachother. Now he's on a journey to reunite with his brother and sister in law and survive this new world.

Its been about half a year since the apocalyptic virus was released into the world and by now any bit of what remained of civilization has gone, leaving a dead world ruled by zombies. Any remaining survivors have been forced to scavenge, run and survive, giving up any remaining humanity they had. Alone a man named William, a former gunnary seargant has accepted that he will always be on his own during this apocalypse. However when he comes across a woman who is being attacked, he soon finds himself protecting a group of people and he finds surviving with a group turns out to be alot harder than on his own...

Daniel Cooper and Sebastian Greene arrives at their camp, but finds everyone gone from it. As they begin to realize that they must start to get along in order to survive, three bandits holds Sebastian as a hostage. Will Daniel save his old enemy or will he leave him for dead?

This spin off follows Nathan as he survives the first days of the apocalypse.

Danger Of The Dead 2Edit

This sequel follows a small safe-zone as they survive through several minor wars against others. As the safe-zone becomes stronger, so does another group outside the walls. A few members of the remaining members of Daniel's Group reunites together, and realizes that they need each other in order to survive. They come across the safe-zone, and they eventually decide to join it. Will the survivors eventually die?

Life at the camp is going good, but as hostile survivors are being a threat to the group, so does one of their own, Greg Castro. This spinoff follows Greg as he endures through his rough past of being with his own group that only consists of himself before he joined the Detroit Safe-Zone.

A group of survivors must find ways to survive to the possible end of humanity.

Four men begins to build up their base. As they started their new jobs, 6 former high school students runs towards their base, which they used a small mall. Will the students be allowed to join the four men?

It follows a camp group with survivors as time goes by during the apocalypse.

Characters from the various stories on UFSW have been sucked into an alternate universe and are forced to compete in a fight to the death in a Hunger Games style arena that is, of course, filled with the undead. The last character standing wins.

Retrieved from "https://undeadfanstories.fandom.com/wiki/Finished_Stories?oldid=179127"
Community content is available under CC-BY-SA unless otherwise noted.