Start a Wiki
Evan Curtis is a character in Say Goodbye to America: Scatter
Evan Curtis 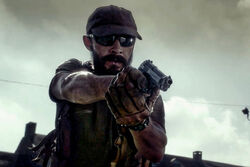 Nothing is known about Evan's life before the outbreak

At some point, Evan joined up with Sebastián Bernal and Octavio Arévalo

Evan first appears when he puts a gun to Matt Graham's head and he doesn't see Sebastián or Octavio. He asks where three other survivors went, but is happy to see the other two. He agrees to join Matt back to Apex

Even appears keeping watch with Octavio in the night. He discusses whether or not they should trust Matt

Evan appears with the others arriving in the aftermath of the attack on Apex. He watches as Octavio saves Matt's life from an undead Lindsay Meyerson

Evan is seen with Sebastián and Octavio in Jenny Hanson's house during her meeting. He is surprised when Sebastián volunteers to go out to get more supplies to rebuild Apex. Evan is seen opening the gate when Aaron Meyer, Jack West, Taylor Burns and Eddie Hedd step out to greet Izabel and Nils, who had just arrived at Apex after leaving the Yard. He makes them put their weapons on the ground.

Evan is seen guarding the gate with Octavio when Lewis and Julian arrive at Apex. He makes them put their weapons on the ground before letting them in

Evan is seen with Octavio leading Lewis and Julian into Apex

Retrieved from "https://undeadfanstories.fandom.com/wiki/Evan_Curtis_(Scatter)?oldid=208815"
Community content is available under CC-BY-SA unless otherwise noted.