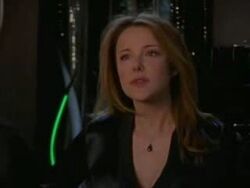 Dr. Elizabeth Hill is a character in Say Goodbye to America: Scatter

Nothing is known about Elizabeth's life before the outbreak, except that she was a nurse

At some point, she founded the Apex community with several others.  She is given the nickname "Dr. Hill" even though she never got her doctorate

Elizabeth first appears in her office when Garrett Smith and Phillip James drag Matt Graham's unconscious body into her office.  She is present when Dimitri Vanderbilt shows up.

She is present when Matt wakes up after having his arm amputated.  She attends Jenny's party and shares a drink with Phillip.  They head back to her office and end up spending most of the evening together

She checks up on Matt in the morning and confirms he has no fever.  She later speaks with Phillip about how awkward their encounter the previous night was and to leave it as what it was.  When Miranda come in, she turns her attention to her.

Elizabeth is seen with Jenny, Matt, Garrett and Tracy talking about the mission to the mall when Phillip returns

Elizabeth is seen in her office with Kendall Standish when Dimitri Vanderbilt and Eli Wilson reveal Bentley died in the mall. Kendall tells Elizabeth she will keep the baby

Elizabeth is seen in her office when the construction crew comes in with an injured and amputated Warren Smith. She is unable to save his life and ultimately puts him down before he can turn

Elizabeth is seen in her office when Train and Horace bring Maine Ryan into her office after he was left for dead by Brooks.

Elizabeth is present at the start of the attack on Apex. She first puts Horace down before later being seen helping the injured in her office. She gives Miranda a knife so she can put down Owen. After being given Will Knight, she tells Phillip she is not responsible for his death

Elizabeth is in her office with Maine Ryan and an unconscious Will Knight and Luka. She is present when Peanut breaks free and takes the few of them hostage before making Elizabeth give him supplies as he leaves

Elizabeth is seen when Donnie opens the door to her office and frightens her. She later is present when Luka wakes up and gets him pain medication. She is not present when Will Knight wakes up

Retrieved from "https://undeadfanstories.fandom.com/wiki/Elizabeth_Hill_(SGTA)?oldid=209565"
Community content is available under CC-BY-SA unless otherwise noted.