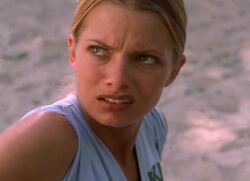 Elena Palmer is a character in Say Goodbye to America: Scatter

Nothing is known about Elena's life before the outbreak, except that she was a math teacher in her fourth year

After Brooks shoots Judy and Niklas is taken captive, Elena rides back in Judy's BMW with Brooks and Gavin

During the Manhunt for Leo, Elena, along with Bryce and Patrick Henderson, track him through the woods.  She and the two men talk about their ammo count before Bryce is stabbed in the chest by Leo.  As he tells her to drop her gun, Patrick runs and Elena attempts to reach for it.  She is ultimately shot in the head

Retrieved from "https://undeadfanstories.fandom.com/wiki/Elena_Palmer(SGTA)?oldid=207325"
Community content is available under CC-BY-SA unless otherwise noted.