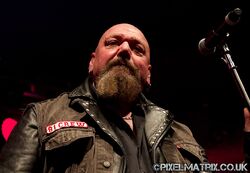 Eddie Hedd is a character in Say Goodbye To America: Scatter

Eddie was part of a band in Great Britain long before the outbreak. After the outbreak, he was with his band, bus driver and manager. They all died before he got to Apex

At some point, Eddie joined the Apex community

Eddie is on watch the night that Sean Moreland makes his way over to the community after being thrown out of his own. Eddie allows Sean to stay with him until the next guard shift in the morning

Eddie is first seen with Sean watching the sun rise, talking about Sean's life before the outbreak. He leaves watch when Otis takes over his shift. He is present when Niklas and Ruben Eastview before leaving to see Jenny. Once at her door, the Eddie and Sean walk in to have a meeting. He is present when Scott, Warren Smith and Gavin walk in to talk about possible jobs for Sean and Gavin

Eddie appears with Jack West and Basil when Garrett Smith walks up to the three after returning from the mall. He calls out Garrett for not telling Jack his brother died. Later, Eddie joins Garrett, Basil and Rick Conrad in search for Fish West, who stole the U-Haul. After finding him burying Timothy West, Eddie is sent back with Basil and Rick to Apex, as per the wishes of Garrett

Eddie appears in Jenny Hanson's house with Leo, Otis and Aaron Meyer after returning with the U-Haul. He pleads to Jenny to let Fish work this out with Garrett but Jenny wants Eddie to lead Leo and Aaron to find Fish anyways

Eddie returns with Leo and Aaron during the latter half of the attack on Apex, during which Eddie shoots and kills a Yard Soldier leaning on the wall reloading. He is present when Meredith is killed and Gregory Ames flees

Eddie is first seen in Jenny's meeting. He later appears with Train, Jack, Taylor Burns, Aaron and Evan Curtis letting Izabel and Nils into Apex. He lets them enter and drives their truck into the community

Eddie witnesses Niklas stab Nils, and later offers crowd control as Elizabeth Hill works on him. He lies to the crowd and says he never saw Nils before

Eddie is seen with Jack as Otis walks by

Eddie is first seen on guard with Jack worrying about the group at Waterfront. He is the last person to see Todd Andrews, as he leaves on Eddie's shift

Retrieved from "https://undeadfanstories.fandom.com/wiki/Eddie_Hedd_(SGTA)?oldid=208806"
Community content is available under CC-BY-SA unless otherwise noted.