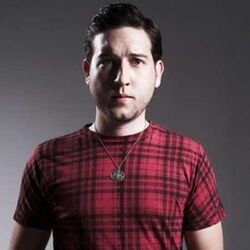 Nothing is known about David's life before the outbreak

At some point, David joined the Soapstone Trail Military Base

David first appears after the escapees from the base have let the biters in and Captain Lucas McDermott used a rocket launcher to blow up the remaining undead. He uses a spear to stab the brain of the dead biters. He, McDermott, Corporal Maxwell and Sergeant Gutierrez stumble upon Gary Sanchez's reanimated corpse, which David correctly identifies. The five of them then continue to clear the dead of the base

Retrieved from "https://undeadfanstories.fandom.com/wiki/David_Sharpe_(Scatter)?oldid=209843"
Community content is available under CC-BY-SA unless otherwise noted.