Start a Wiki
David Del Rio, also known as Delirium, is a character in Say Goodbye to America: Scatter
Delirium 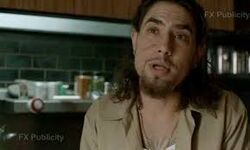 Nothing is known about Delirium's life before the outbreak

At some point, Delirium joined the O'Connor Compound

Delirium first appears during the attack on the Waterfront Community, where he takes a position far away and fires at the survivors with a sniper. After Jenny Hanson kills Clove, she fires at Delirium and takes him out of his position, telling him not to move. When she is distracted by the approaching vehicles, he is able to take her gun and hop in Rangel's car, driving back to the Compound

Retrieved from "https://undeadfanstories.fandom.com/wiki/David_Del_Rio_(Scatter)?oldid=211187"
Community content is available under CC-BY-SA unless otherwise noted.