Start a Wiki
Cosmo Murphy is a character and a secondary antagonist in the first two seasons of Say Goodbye to America: Scatter
Cosmo Murphy 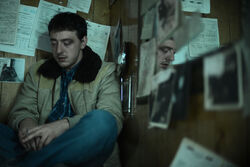 Nothing is known about Cosmo's life before the outbreak

At some point, Cosmo joined Gregory's group with his father, Rick Murphy as a member of the 'B' Squad

Cosmo first appears with Gregory and Rick out near Lake Crabtree. He is later seen at the Target after Brooks kills Judy. He asks if Liam put down Richardson.

Cosmo is set on to watch Niklas's tent. At some point, he gives control to Sean Moreland

Cosmo is seen in Spencer's trailer with Izabel, Brooks and Nils when Brooks brings up the idea of a mutiny

Cosmo joins the rest of the 'B' Squad on the mission to the mall. He rides in the truck bed holding onto the machine gun in the back with Lottie, Gregory, Margot, Rick and Brooks. He later joins Julian and Lottie into the Sears outlet, before joining the others to investigate the screams from the other end

Cosmo joins the others when approaching Todd, Phillip, and the West brothers. He is present when Fish stabs Lulu and Spencer shoots Timothy. He escapes with the others

Cosmo drives back from the mall in Gregory's truck. He tries unsuccessfully to alert Gregory to Spencer's crash, but eventually picks up the survivors and returns home

Cosmo appears with his father teaching people to shoot. He first helps Daisy Montgomery and then Samuel Tollett. He later has sex with Daisy that night before leaving the next day for Apex

Cosmo, under Gregory's orders, takes Daisy, Peanut and Joe Jeffries to attack and burn the farming fields. While there, he slices Deedee in two, but is suddenly shot in the head by Jasper Bernard

Retrieved from "https://undeadfanstories.fandom.com/wiki/Cosmo_Murphy_(SGTA)?oldid=208510"
Community content is available under CC-BY-SA unless otherwise noted.