Start a Wiki
Clove is a character in Say Goodbye to America: Scatter
Clove 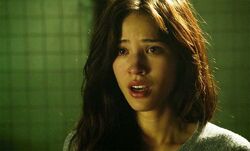 Nothing is known about Clove's life before the outbreak

Clove first appears with Copper, Noah, George, Samantha and Noam when Harris Moore, Ned O'Connor and Dave O'Connor appear and tell them of a lone vehicle heading their way. She agrees with Dave and finds it peculiar to go in "full force" for just one vehicle. She and Dave later take Octavio Arévalo and Eli Wilson hostage before watching Harris kill the former. She stays with Harris, Noam and Samantha in case anyone looks for Octavio and Eli

Clove appears with Harris, Samantha and Noam firing at Rick Conrad, Jasper Bernard, Harper and Evan Curtis. She is struck in the leg by Evan. When the fighting is over, she is taken hostage by Jasper and Evan

Retrieved from "https://undeadfanstories.fandom.com/wiki/Clove_(Scatter)?oldid=209422"
Community content is available under CC-BY-SA unless otherwise noted.