Start a Wiki
Ciara Nash is a character in Say Goodbye to America: Scatter
Ciara Nash 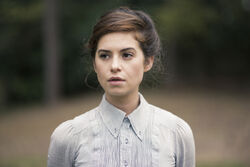 Nothing is known about Ciara's life before the outbreak

At some point, Ciara joined the Waterfront Community

Ciara is first seen in the train station when Leo Henderson and his group arrive and hear her. She surrenders and talks to the group, including Phillip James, Miranda, Jackson Allen and Sebastián Bernal. She calls to Chester, Barney and Vazquez to make themselves known instead of hiding

Retrieved from "https://undeadfanstories.fandom.com/wiki/Ciara_Nash_(Scatter)?oldid=207419"
Community content is available under CC-BY-SA unless otherwise noted.