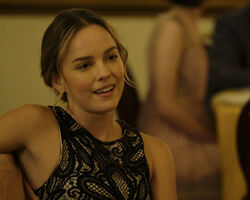 Nothing is known about Camilla's life prior to the outbreak

At some point, Camilla joined the Waterfront Community

Camilla is first seen at the Wiggins Outpost during the attack from the O'Connor Compound, during which she fights alongside Amin Issawi, Nathaniel and Ethan Ross. She provides cover fire for Amin. After the attack, she returns to Waterfront with the others

Camila first appears on guard duty smoking a cigarette when Tori arrives and chats with her. When she sees an unknown man park out in front of Waterfront, she fires a warning shot at him but welcomes him in when he says he is looking for his daughter, Shoshana Adams. She later meets with Kotter, Chester Navarro, Tori and Stan and tells the former Shoshana died six months earlier, but does not correct Stan when he says she died from a bite

Retrieved from "https://undeadfanstories.fandom.com/wiki/Camilla_Furtado_(Scatter)?oldid=211182"
Community content is available under CC-BY-SA unless otherwise noted.