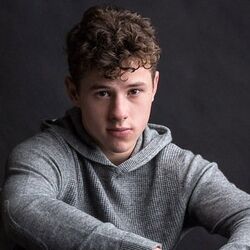 Nothing is known about Cameron's life before the outbreak, except that he used to hunt with his father

At some point, Cameron joined the Yard

Cameron first appears in line in front of Arrowhead holding a Bolt Action Rifle. He asks what the meaning behind the nickname is, and shuts up when he finds out. Cameron reveals to Gregory Ames that he hunted when he was younger. He is later seen getting in the truck bound for Apex. Once there, he yells at Otis that the Apex people have no idea what the Yard soldiers have fought for. He later shoots a survivor on Gregory's orders

It is revealed that Cameron shot and killed Horace, and is praised by Gregory. His body is later found by Arrowhead by the truck with a bullet in his chest. Arrowhead puts him down

Retrieved from "https://undeadfanstories.fandom.com/wiki/Cameron_Doyle_(Scatter)?oldid=207351"
Community content is available under CC-BY-SA unless otherwise noted.