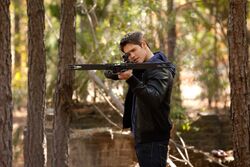 Callum is a character in Say Goodbye to America: Scatter

Nothing is known about Callum's life before the outbreak

Callum first appears after the fight between Sean Moreland and Avi as he is called over by Gregory with Liam and Alex.  He is told to head back to the Target and follow the group there back to their home.  Before leaving, he talks with his "best friend" (actually lover) Maine Ryan, and they discuss the term "boyfriend". Along the way, Callum reveals his homosexuality to the other two men and tells them he is afraid to reveal it to the rest of the group.  The two men reassure him that people will always have his back.  The group share deep personal stories with each ither until they arrive.  Once there, Liam is shot quickly in the head.  Before he can question what is going on, Callum too is shot in the head by Ruben

Callum's corpse is later discovered by Maine, Max and Taz outside the Target after being executed by Ruben. Maine sees his body but does not stick around to confirm his lover's death

Callum is seen in Maine's dreams, explaining that the two will finally be together again. He helps ease Maine into the warm embrace of death

Retrieved from "https://undeadfanstories.fandom.com/wiki/Callum_(SGTA)?oldid=208762"
Community content is available under CC-BY-SA unless otherwise noted.