Start a Wiki
Cal is a character and a secondary antagonist in the second season of Say Goodbye to America: Scatter
Cal 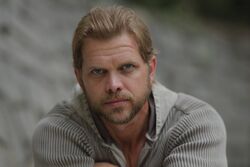 Nothing is known about Cal's life before the outbreak

At some point, Cal joined the Waterfront community

Cal is first seen in Judas's (at the time Ryan) house with Emil, Cassius Killian and others discussing the impending Midnight Rebellion. He is later seen in Shoshana Adam's house with Ryan, where he shoots Sean and watches Ryan, now going by Judas, shoot and kill the leader of the Waterfront community

Cal is seen attacking Chester Navarro in Shoshana's house and hitting with a bat before choking the man. He is stopped when Reina shoots him three times in the body, then the head to prevent reanimation

Retrieved from "https://undeadfanstories.fandom.com/wiki/Cal_(Scatter)?oldid=208520"
Community content is available under CC-BY-SA unless otherwise noted.