Start a Wiki
Byron is a character in Say Goodbye to America: Scatter
Byron 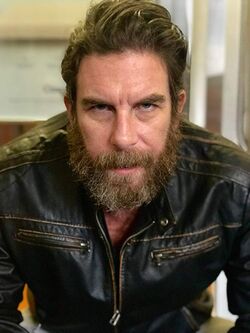 Nothing is known about Byron's life before the outbreak

At some point, Bryon joined the Waterfront Community and became a rebel under Cassius Killian

Byron is first seen with Cassius, Harvey and Roselyn when the four plan to enter the Waterfront and continue Judas's steps for stage 3. Eventually, they join other rebels in fighting Milo, Katie Robertson, Elijah Fitzgibbons and others, with Katie shooting Byron in the shoulder. Once the group gets the minigun, Byron, Roselyn and Art are seen holding the Waterfront and Apex soldiers at gunpoint

Byron stands with Cas, Roselyn, Art, Harvey and Harrison holding the survivors at gunpoint. After Katie is killed, he watches as Jenny Hanson tricks the rebels and is the only member armed. When D.J. Emerson attacks Ciara Nash and Blake Miller, Byron shoots Chester Navarro in the shoulder before being taken down and executed by Dexter Hubbard

Retrieved from "https://undeadfanstories.fandom.com/wiki/Byron_(Scatter)?oldid=211111"
Community content is available under CC-BY-SA unless otherwise noted.