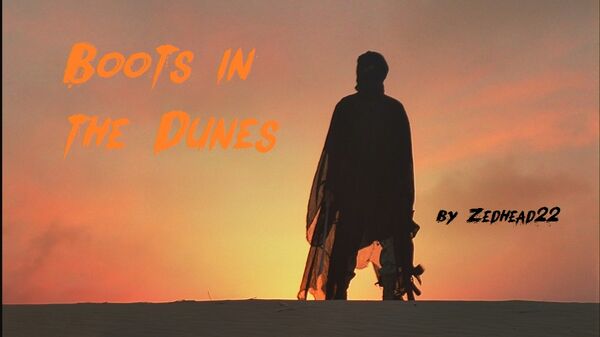 Boots in the Dunes is a short story by Zedhead22

When the residents of a town decide to make stand, they set off a chain reaction that leads to the entrails of betrayal where the moon shines on the desert wasteland.

The warriors had offered to die. They had given their utmost charity to keep the loose town together. By the Sun's set, they would be dead, after all it only took the crazies five minutes to bite off one's fingers. The warriors were not cowards, not burdens to the residents. The armed stood front with daring spears at their hips... waiting for the moans.

Whether it was meant to be, Arnold knew there was no turning back. He held his wooden club behind the alignment of guards with spears. Arnold rustled his curly black hair, nervous about the upcoming event. He glanced at the glamorous sunset. Jubilant colors skyrocketing out and calling out for merciless death.

Among the warriors on steep hill, Arnold looked to his left to see a panting friend. The red-faced teenager was holding a splintered club like his in shaky hands. “You okay, Scott?” Arnold admired his buddy. Arnold let out a drawn out sigh as he watched the valley below darken.

“Peachy,” Scotty replied, patting his wooden club with unsure hands. Scott's ruffled blonde hair was overshadowed by a bandana he had strapped across his forehead. Scotty only came since Arnold volunteered for the duty. The two highschoolers were in it together, plus Scotty didn't want to be a wuss and wuss out.

The front row held out their spears. “Set!” A loud voice erupted from a spear-wielding punk. Santiago set his foot into the sands, “Position!” He called out with a rough voice, gritting his teeth. Santiago turned and winked at Scotty and grinned. “Head up, Scotty boy.”

"Hey, hey. No need to get mad, boy-o,” Santiago turned to eye Arnold with his rumpled up hair. “Get that club ready to bash in these sickos, alright?” Santiago jeered, snickering at Scotty again.

“Oh yeah, I'm more than ready,” Arnold joked, “maybe the sickos'll leave us once they see your buzzcut.”

Santiago dropped his grin into the sand dunes with his feet. A week ago, before the barber took to being dead, Santiago and his crew had went to get clean buzzcuts. Scotty quit his panting and chuckled as he looked up and looked at Santiago's buzzcut. He turned and saw Santiago's two friends, Jonsie and Todd, flaunting their funny looking hair.

“Yeah, yeah, okay,” Santiago shifted his feet and went to face the back. “I'll be back, Arny and Scotty.” Santagio blew through the sea of warriors with worthless clubs and past the sling-shooters who cowered when they saw Santiago's might. Where was he?

Santiago squinted, covering his eyes from the rising sand in the air. “Where's Archie?” He asked a boy packing pellets into his pocket. The boy continued on, showing no interest in the punk that could rip him into halves. “Where is he?” Santiago hissed.

The sling-shooter looked up, “Oh it's you. I saw Archie loading the carts when we left.”

Santiago smiled grimly. “You realize that was twenty minutes ago, correct?”

He nodded. “Get outta my face please, I have to separate my ammunition.” Santiago scowled, cursing through his teeth. “Does anyone know where Archie is?” No hands pipped or words uttered, only the clanging of weapons. Santiago shot a look at Arnold, trying to dig an answer out of him.

“Hey Santiago!” A dimwit bellowed, “Archie's that short stack, ya?”

“You betcha, I saw him like four days ago brushing his teeth.”

“I'ma pummel his face in when I see him!” Jonsie exclaimed, turning around with a fist in the air. “He jacked my toothbrush!”

Santiago sighed. If they didn't get that payload here, they would have just wasted time. Would it better better to pull back and defend the gates? Oh how he wished to see that short stack-

“Coming through!” A voice yelled from behind two wooden carts nearing the warriors. “Go, go, go!” Archie shouted and pushed forward the energized carts. He smiled and clapped, wiping sweat from his face. “Hey Santa!”

“It's Santiago and where were you?”

“Oh boy, not this. The others told me to help them put a padlock on the gat-”

“They locked us out?!” Santiago screamed, stabbing his spear into the sand's vegetation. He closed in on a fear stricken Archie.

The eyes of Santiago lit up, flustering with rage. “No, no, no...” Santiago raked his hands through his greasy buzzcut. “We're bait.”

“No way!” Before Archie could quiver in surprise, the sling-shooters jumped into the wooden carts and pushed forward with two people pushing on each cart. Santiago could only turn to see his warriors dive into a battle with no gain.

The roars of undead came first. Arnold rushed forward, slapping his club against a sicko's face. He heard an uttering crack, and let the sicko sway his arms in the air as he fell. Arnold caught his breath, a sandy one at that.

Arnold blinked, rubbed his eyes, and scratched at his throat. He was parched and hadn't drank since the morning before. Now at midnight, his stomach grumbled. He was ablazed with a rush of exhausting energy.

The elongated spears kept the enraged crazies at bay for a while. It seemed to work out until three crazies took down a quarter of the group. Packs of undead swarmed the rest, with Todd trying to keep order. He must've asked himself where Santiago was. Where was he anyways? Todd would never know since he was overwhelmed by cold teeth that snapped fingers off in about five minutes.

“No, look.” Arnold pointed. His finger which could snapped off by cold teeth in about five minutes showed the way to the endless masses of dead overthrowing the warriors. It all went by fast, the sling-shooters desperately blasting indents into skulls, but not fast enough. “Game over, man, game over...”

The tiresome Santiago moved through the frosty desert winds. His spear went ahead of him with each step towards the town's front gates. His swift movement stood no chance against the force of the strong winds. Along with that, Santiago had begun worrying.

He had told the nerd to alert the army about the betrayal and to gather up when they could. Santiago hoped they would come in one piece. He hadn't had time to warn them himself. He had to get to the town before they were swarmed.

Santiago soon saw the glint of torches that centered the fort. He passed over a mossy, wet pile of logs and a heap of scrap cans. Santiago could use some spam. Maybe a sandwich? Don't get ahead of yourself, he thought.

“Come on, come on...” The angered punk charged through the shearing wind, only making a few feet's worth of progress. “Damn you!” He shouted at the gates. “Damn you if you can hear me!” He couldn't make it, but he was so close. He and the others weren't going to die for the scum they were protecting.

Through the gleaming light, he grabbed the metal gate. He pounded his fists to it, hearing it rebound and echo out. Thus, echoing out to the creepy shadows shambling towards him. Those weren't his boys, they were sickos.

“Don't you do this,” He pounded his knuckles harder ad harder. “You just don't do this!” He kicked and took a step back before gutting the padlock with effortless ease, letting it drop into the sands like his feet.

He shoved through the gates with a thrust of frustration. He shut the gates behind him, letting it rebound and echo to the closing in sickos. Santiago aimed his spear at what he saw first. Eyes watching him from their tents.

“Stop!” A grumpy man with a full grown beard edged through his hovel, a dwelling composed of a bent wooden plank and some rusty nails. “Stand back, you.”

Santiago held his spear tighter. Without a doubt, the tip was damaged permanently. “You know my name, Albert.” “Go back, now. I mean it.” Santiago took the hit. “For what, huh, just so you can lock me out again with my boys dying back there?” He craned his neck towards the tiny crowd gathering, looking for answers.

A skinny water boy held up his hand, “We voted. Take some water if you want.” He tossed it, the water showering Santiago's feet in the sand. The precious water was as good as gold, and the skinny water boy had just done so to waste it.

“You say something, kid?” Santiago scoffed, raising his spear. A gasp spread through the residents Santiago had tried to be their savior. Instead, now they were shocked at him. “You shit!” He grunted as he leveled the spear above him. “Ah!”

Before he could react, a fist struck his nose and sent a chilling crack through the air. “What?” He muttered, soon feeling a burst of pain in his gut as a multitude of punches met him. Santiago faltered back after someone with a miniature knife went into his shoulder.

An ungodly scream left Santiago's throat as he tried to regain his balance with his boots in the sand, but ultimately collapsed to the floor with a sorrowful cry. He landed outside into the cold, barren, dark wasteland outside. The only light had marked the shadows of the dead getting closer and closer.

The poor punk looked up from the entanglement of vegetation as Albert went to seal the gates once and for all. “You son of a...” Santiago tried to keep the gates open with a hand, but felt his bones ache and send him down. Through the darkness, only the shutting of the gate's echoed, followed by ghostly, rising moans.

Retrieved from "https://undeadfanstories.fandom.com/wiki/Boots_in_the_Dunes?oldid=97251"
Community content is available under CC-BY-SA unless otherwise noted.