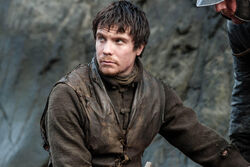 Nothing is known about Blake's life before the outbreak

At some point, Blake joined the Waterfront community as a guard

Blake is first seen when Chester Navarro leads Phillip James and the others to Waterfront. He stands atop the gate and talks to Barney Munson and lets the group in.

Retrieved from "https://undeadfanstories.fandom.com/wiki/Blake_Miller_(Scatter)?oldid=208767"
Community content is available under CC-BY-SA unless otherwise noted.