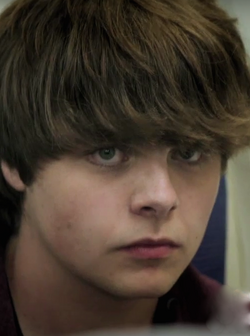 Bentley is a character in Say Goodbye to America: Scatter

Nothing is known about Bentley's life before the outbreak

At some point, Bentley joined the Apex community.  He mostly hangs around Matt Graham, Niklas, and Carl.  He lives with Dimitri Vanderbilt and Kendall Standish

Bentley is seen at Jenny's party with Kendall, Luka and Phillip talking about the foods they miss.  Bentley notes that he misses Clam Chowder from Maine.

Bentley appears sitting next to Kendall and Luka during the service for Judy.  Afterwards, he and Kendall ask Jenny if she knows if there's more morning after pills because he and Kendall are worried about their sexual encounter the previous night.  He is told to ask Elizabeth Hill and leaves

Bentley is seen in Jenny's house with Kendall discussing the mission to the mall. Later, the conversation is cut off when Bentley talks about possibly having children with Kendall

Bentley is among those who heads back to the mall with Todd and his group. While there, he heads to the jewelry store with Matt, trying to find a ring for Kendall. While there, he is ambushed by Gregory and shot in the back and dies

Retrieved from "https://undeadfanstories.fandom.com/wiki/Bentley_(SGTA)?oldid=207388"
Community content is available under CC-BY-SA unless otherwise noted.