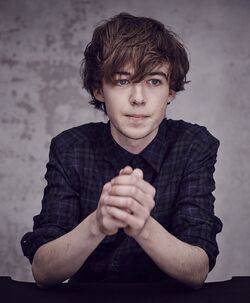 Nothing is known about Asher's life before the outbreak

At some point, Asher joined the O'Connor Compound, where he worked in the kitchens

Asher is first seen with Thomas Packer and Dave O'Connor feeding the prisoners in a cell. He seems to be friendly with Kevin

Asher is present with Peanut when Eli Wilson reveals they are being served human meat. He agrees to help Kevin and the rest escape. He returns with Victor Montrose to set a plan

Asher is with the others when they plan their escape, which involves him setting a fire and distracting the guards. However, he is caught and brought to Ned O'Connor

Asher is continued to be tortured by Ned and watched by Karim Fadil. When Asher tells Ned about the Yard, Ned does not believe him and proceeds to punch him before attempting to remove one of his eyelids. Karim then takes over for Ned

After Ned tells him of Peanut's return, Asher finally gives in and tells Ned about Apex. For a reward, he is given two chicken pot pies. While eating, he is continuously harassed by Karim, to the point where the two eventually start fighting and Asher is able to bash Karim's head in with a table leg. When Ned finds out, Asher begs to be killed but is knocked out instead

"A Plague On your Houses" Edit

Asher is taken by Ned to his car so he can be used at Apex. After being placed in the backseat, Hogan opens the drives side door, which sets off an explosion which kills them both

Retrieved from "https://undeadfanstories.fandom.com/wiki/Asher_Praedo_(Scatter)?oldid=211200"
Community content is available under CC-BY-SA unless otherwise noted.