Start a Wiki
Arturo Vazquez (Also known as Vazquez) is a character in Say Goodbye to America: Scatter
Vazquez 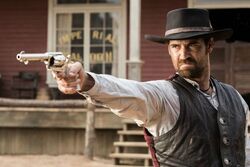 Nothing is known about Vazquez's life before the outbreak

At some point, Vazquez joined the Waterfront Community

Vazquez, Barney and Chester are introduced by Ciara Nash to the Apex group. He points out David Blair's messed up arm and agrees to take the group to Shoshana Adams at Waterfront. Along the way, they stop at the Pungo River Outpost and pick up Milo, before being let into Waterfront by Blake Miller. He, along with Chester, Ciara and Barney, bring the Apex survivors to meet Shoshana

Vazquez introduces the Apex group to Shoshana. He listens to Phillip James explain the situation before they leave and Vazquez heads home

Vazquez is seen with Barney and Nate Demarco at the end of the Midnight Rebellion, where they capture Emil and Cassius Killian

Vazquez is seen with Chester, Leo Henderson, Phillip and Sebastián Bernal discussing terms of trade after the Rebellion. They eventually come to an agreement

Retrieved from "https://undeadfanstories.fandom.com/wiki/Arturo_Vazquez_(Scatter)?oldid=208818"
Community content is available under CC-BY-SA unless otherwise noted.