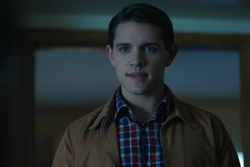 Nothing is known about Arthur's life before the outbreak, except that he was a PFC in the U.S. Army

At some point, Arthur followed General Joseph Haynes to the army base after most of the military was overrun

Arthur is first seen standing in a guard tower at the army base when Corporal James Cobalt yells for him to alert the General. He yells down to his sister, PFC Alice Monroe, to find Haynes

Retrieved from "https://undeadfanstories.fandom.com/wiki/Arthur_Monroe_(Scatter)?oldid=209550"
Community content is available under CC-BY-SA unless otherwise noted.