Start a Wiki
Arnold is a character in Say Goodbye to America: Scatter
Arnold 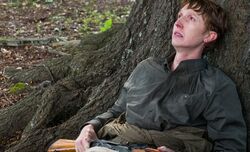 Nothing is known about Arnold's life before the outbreak, except that he is described as afraid of his own shadow

Arnold is first seen standing guard with the young Paul Daniels. At some point in the night, Chuck relieves him of his duty. He passes Marla and asks about the meal plan for the next day

Arnold is seen dying during the operation. He is put down by Kayleigh

Retrieved from "https://undeadfanstories.fandom.com/wiki/Arnold_(Scatter)?oldid=208763"
Community content is available under CC-BY-SA unless otherwise noted.