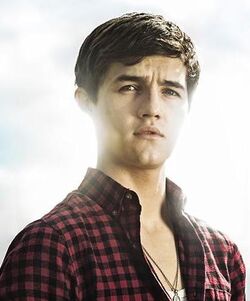 Anthony is a character in Say Goodbye to America: Scatter

Nothing is known about Anthony's life before the outbreak

At some point, Anthony joined The Yard

Although not physically in the episode, Anthony is mentioned by Rick Murphy as one member who volunteered to attack the Target, but is told to stay behind by Gregory Ames.

Anthony first appears telling Gregory that everyone is ready for the fight between Sean Moreland and Avi. He is later mentioned several times as a member of Niklas's list, but it is uncertain how he got there

Anthony talks with Lewis as he leaves Gregory's trailer. He is later present after Stephanie Key's attack and enters Virginia's tent to find her. He is bitten by her and puts her down, but he ultimately hides the bite

Anthony is seen talking with Lewis and Max if they will fight. His bite is later discovered by Lewis, who knocks him out and ties him to a chair so he can't leave. Julian and Max soon join Lewis and see the now undead Anthony. It is decided that Anthony will be released after Gregory leaves

As Lewis and Julian leave, they release Anthony, who begins to attack survivors at the Yard. This causes other walkers to attack as well. Later that day, Anthony's corpse is not seen among the undead, so it is assumed it went elsewhere

An undead Anthony is seen during the invasion of the Yard, biting Max on the arm and infecting him before being stabbed in the head

Retrieved from "https://undeadfanstories.fandom.com/wiki/Anthony_(SGTA)?oldid=209357"
Community content is available under CC-BY-SA unless otherwise noted.