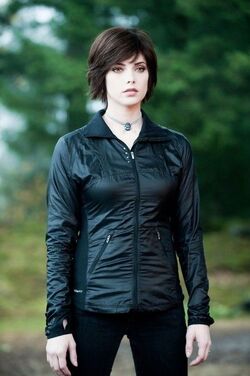 Annie McGovern is a character in Say Goodbye to America: Scatter

Nothing is known about Annie's life before the outbreak, except that she had plastic surgery at the behest of her abusive ex-husband

At some point, Annie joined the Apex community.  It is assumed she is a guard or works with the front gate

Annie appears in the church attending Judy's service, where she introduces herself to Todd Andrews.  After the service, she and Todd head back to her place

Annie sits on the couch in her house with Todd reading an old magazine. After Todd asks how old she actually is, Annie reveals that she is 35 and had plastic surgery to make her look younger after her verbally and physically abusive ex-husband said he would leave her if her looks went. She tells Todd that after the world went to shit, she went to her ex-husband's house and killed him. She also reveals that she has killed three other people since the outbreak, and has become the woman she is because of it

Annie is seen in Meredith's house with Elizabeth Hill, Olivia Graham, Dexter Hubbard, Kendall Standish, Doug Santos, Oliver, Miranda, Taylor Burns, Jack West and Hannah Johnson discussing spirit animals over wine and crackers. Hers is a seahorse. She gives animals to others in the room who do not know what theirs are

Annie is seen with Miranda, Hannah and Lindsey Meyerson as the group returns from the mall. She hugs Todd and the two head off

Annie is very briefly seen in her house

Annie is seen during the Attack on Apex. She watches Hannah get killed by Arrowhead and later kills a Yard Soldier

Annie is seen in her house late at night with Todd, Taylor, Oliver, Dex and Eli Wilson before she leaves to shoo away Harper's cat. She is then attacked by the undead Logan Schiff, who bites her before she can kill him. She dies and turns within 20 seconds

Annie is seen tearing at Maine Ryan's neck as she infects him, before he eventually escapes her grasp. Afterwards, she is finally seen by Todd and Jenny as she shambles on over, before being out down by the latter

Retrieved from "https://undeadfanstories.fandom.com/wiki/Annie_McGovern_(SGTA)?oldid=211234"
Community content is available under CC-BY-SA unless otherwise noted.