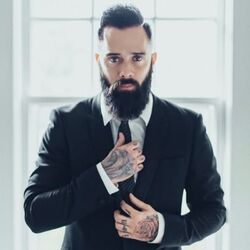 Nothing is known about Aidan's life before the outbreak, except that he was a doctor at Wilson Memorial Hospital and Research Center

Aidan is first seen with Dr. Hollis Echlain, Col. Roscoe Jefferson, Pvt. Pablo Jimenez and Pvt. Charles Pinkley. He watches as Hollis tries his new cure on an undead, but ultimately fails at doing so. He then watches Cpl. Jeff Lever bring Luka in at gunpoint

Retrieved from "https://undeadfanstories.fandom.com/wiki/Aidan_Stockdale_(Scatter)?oldid=209250"
Community content is available under CC-BY-SA unless otherwise noted.