Start a Wiki
Adam McGill is a character in Say Goodbye to America: Scatter
Adam McGill 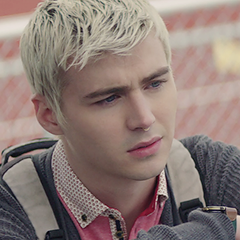 Nothing is known about Adam's life before the outbreak

At some point, Adam joined the Yard

Adam, along with Ryo Osaka, Jane Byron and Max are the only ones in the Yard to vote against the group, opting to leave the Yard behind. He, Ryo, Max, Grease, Vass, Brooks, Lottie and Rick leave the next morning leave to find supplies since they decided to stay.

Adam walks with Ryo in the gardening section looking at seeds and tools. The two talk about a plan but do not go into detail. Ryo eventually decides to not follow Adam, although Adam tells Ryo he is still allowed to leave if he wants.

Adam is seen with Daniel Chance while Gregory walks through the Yard. The two turn away from him

Adam is seen with the rest of the survivors around the campfire. When biters invade, he is seen with Daniel and Ryo trapped, but is rescued by Lottie and Arrowhead. He is present when Annabelle Wheeler and Daisy Montgomery arrive with Donald Hawkins and James Cobalt, saving the survivors

Adam and Daniel visit a dying Grease and Amin to let them know of their decision to leave. They offer them a ride but they decide against it.

Retrieved from "https://undeadfanstories.fandom.com/wiki/Adam_McGill_(Scatter)?oldid=211214"
Community content is available under CC-BY-SA unless otherwise noted.