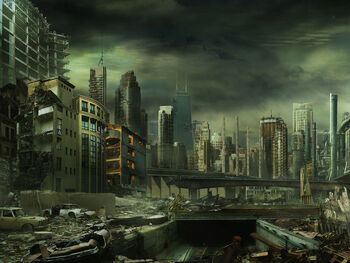 The Active Stories page is where the authors of this site display their work. Below are the stories written by each author, divided by section respectively and arranged alphabetically. Authors can add their stories, but keep in mind that the admins and the janitor will be moderating it.

Readers Read This!!
Feedback is very important to an author. Giving positive feedback motivates them to keep on writing. Therefore, it is suggested to leave a comment on the issues you read, for the author's sake.
Positive feedback is highly encouraged to maintain a friendly atmosphere. Critiques are welcome.

The Stories
This section is still a work in progress. Click here for more information.

Michael is an ordinary man.He has a job,responsibilities and a family to take care of.But when an virus sweeps the entire Nation Michael is forced to toughen up and protect his family.But to protect his family he must make a hard choices like Killing people,Leaving people behind and being ruthless and cold just to Survive.But he must control Who he becomes or else he will change and become a cold blooded killer.This is WHO WE BECOME

Barret is sent on a journey through the outbreak after his Mum gets killed by a walker he must survive as long as he can to live out this plague placed upon the human race. Can he survive why don't you find out by reading The Undead Awakening

Brad Fitzgerald, a former convict is thrown into an horrible apocalypse. He is forced to survive with his former mentor, a savage young man who lost his younger brother, and a broken sister who lost her family and many other people. Together they will have to survive, make allies, kill, and fight.

David and Michelle were over the moon when they found out that Michelle was pregnant. However, their reaction wasn't the same when the apocalypse began, two months into the pregnancy. Bobby was successfully delivered in the back of a van by a fellow survivor, named Sarah, alongside his half-sister, Amelia. Twenty years have came and passed and Sarah, Amelia and Bobby are the only ones left. With numerous untold secrets finally being revealed, can they stay together?

Five years after a pandemic of apocalyptic proportions, a radio broadcast promising hope at a sanctuary named Eden becomes the goal for broken survivors all across the globe.

It's been about four months since the events of Beside The Dying Fire. Ken Myers, a 19 year old boy who has lost most of his family is the protaganist. Thinking they are safe his group lets they're guard down. That's when Kens old enemies strike, a bandit group who will stop at nothing to destroy Kens group. Now the group must survive, now knowing that their is a threat greater than the biters. But there is also a traitor amongst them. See the story through Kens POV as he survives, fights, and fears the living.

Wesley Snipe was your normal everyday man, woke up went to work, came home and spent time with his family, and repeated. Then the apocalypse hit which changed everything for Wesley, he now had to make sure his family survived no matter what. But with the threat of not only biter's, how well can Wesley protect his family?

A group of junior high students are trying to live a good life in the global outbreak, and are hoping to live until this all ends. Little do they know that no place is safe and there is no way out of the outbreak. Searching for a safe place is the ultimate death wish. The face of the zombie is something unforgettable. That world we knew... has gone.

The Fall of Mankind

It's about an experiment failure because they were experimenting about dead bodies. And it turns out they become zombies. But in the other countries the cause of the outbreak is flu. The zombies there is called, Corpse' because they're dead, yeah dead.

What is this...Pain? Stress? Agony? Anything you need to survive is off limits. Nothing is left. Robbie is one of the few survivors left stranded in the new fighting world. The only help he has is the strangers around him. What happens when you have to take chances for people you have only just met? and what happens when things start to crumble?

A Long Road to Fortune

Before the apocalypse, Mexico could be nothing more than a third world country; poorly protected, full of dangerous lowlives, and abundant in corrupt politicians. Now that the apocalypse has dawned upon it, things have taken a turn for the worse. Looting is off the charts, the body count rises dramatically, and what was left of a civilization was essentially destroyed. In one town however, the coastal Tecpan de Galeana, a group of people survived the initial stages of the apocalypse. We follow the journey of Ashton, an antisocial teenager who wakes up in this new apocalyptic world. Together, he and the remaining populus will have to overcome many hardships and rid themselves of the world's old customs in an attempt to survive this new world and learn the true meaning of fortune.

Approximately 18 years after the start of the apocalypse, Dead Legacy follows survivors in the city of Los Angeles, California. Self-sustaining, flourishing, modern--it is the epitome of what a civilization should be after the onslaught of infected brought everything down. But it is a rarity in post-apocalyptic America, which is burdened with societies that had wished, but failed, to achieve the vigor and prosperity touted by Los Angeles. Hoping to breathe new life back into this decrepit United States proves to be a challenge when LA's own defenses are being threatened--from the inside.

Focuses more on the people then the biters. This series brings drama, romance, intensity, and our beloved killing biters! It follows a young African-American, 22 year old Bradley Carr who is on the adventure of the lifetime. He looks forwards to using his knowledge he has gained over the past three years of the apocalypse, as he experience a whole new world. He will experience traveling to places he never witness before, meeting new people, and learning the consequences of his choices.

In the midst of a new presidential election, an underlying factor slowly creeps into the souls of humanity. In the foundations of the disease's effects, it is brushed off as a weak, pathetic flu. Then, the first recorded case of the sickness dies. The undead masses are walking. The governments of the world are quickly to crumble, dragging society down with it. Armies are left to take the responsibility of clearing up the mess, but they have underestimated the forces of the undead, and are quickly finding out that they're up for a much harder fight than they'd imagined. Being forced into the sprawling cities of Indianapolis, brimming with undead, they are forced to do anything in their power to survive and get from one location to another, taking it Step By Step.

Retrieved from "https://undeadfanstories.fandom.com/wiki/Active_Stories_Page_(Front_Page)?oldid=127021"
Community content is available under CC-BY-SA unless otherwise noted.