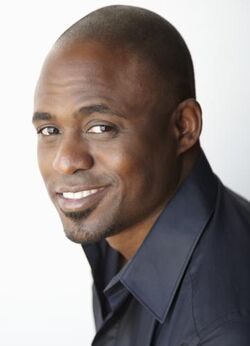 Aaron Meyer is a character in Say Goodbye to America: Scatter

Nothing is known about Aaron's life before the apocalypse

At some point, Aaron, along with Jenny Hanson, her husband, Elizabeth Hill, Timothy West, Garrett, Tracy Long, and Aaron's brother chose Apex to be there new home in the apocalypse.  He at some point became a recruiter for survivors

While his group is being attacked in a mall, Aaron saves Phillip's life by shooting a walker attacking him.  When Garrett and Phillip raise their guns, Aaron advises them to put them down.  When walkers swarm again, Aaron shoots Frank's comatose body in the head

Aaron helps bring the survivors to the truck back to Apex.  He welcomes Todd and Phillip to the community.

Although not seen, it is assumed Aaron is at the party at Jenny's house

Aaron is among the group that leaves to rescue Niklas from Gregory.  He later backs Scott's idea for making the Target a possible stronghold.  He later suggests the idea of lowering a piece of rebar to rib level to impale walkers that come on by so they can kill more with one stab.

Aaron first appears talking with Tim, Paul and Warren about how to protect the perimeter of the Target before leaving with Leo and the others to snatch and grab Niklas. When the group splits, he is with Meredith and Tess and unintentionally listens to their conversation about Niklas and Leo. He arrives in the aftermath of the Massacre at the Target

Aaron appears with Niklas, Leo and Taylor outside the Target putting down walkers and others before they turn. He is seen running up to the corpse of Eric. He is later seen talking to Phillip about the crew going on the run to the mall and leaves with Phillip, Dex and Gavin Foxx.

Retrieved from "https://undeadfanstories.fandom.com/wiki/Aaron_Meyer_(SGTA)?oldid=207482"
Community content is available under CC-BY-SA unless otherwise noted.